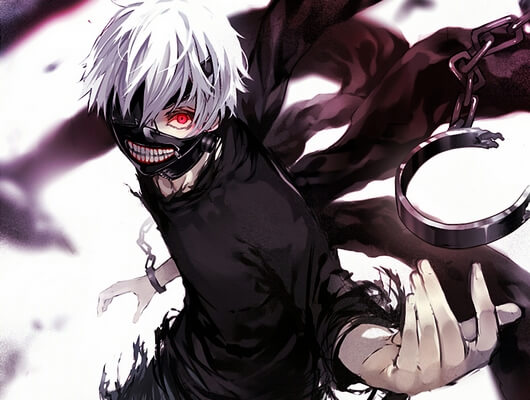 Tokyo Ghoul is quite a fascinating anime (and manga series) as it touches a sensitive topic about human’s nature, psychology, and society. By putting in a natural enemy of human – Ghoul, it leads to a question: How people will deal with their problem and how they will face the reality? That being said, the origin of ghouls in Tokyo Ghoul world is still a mystery. However, before finding out their origin and life, we will take a look at how dangerous they can be to humankind. And so, let’s find out: the World of Ghoul – Power of the Kagune!

Ghoul in culture in real life

In Arabic mythology, ghoul is a type of undead monster, or spirit, which has an unending thirst for human flesh. So to some extent, we can say it is similar to the zombie term we often use today.

* Fun fact: the term ghoul is also used to refer to people who have great fascination in deathly and grim aspect (or macabre), for example graverobber or gravedigger.

Nowadays, we also see the term ghoul used a lot in entertainment industries like gaming, movie, and comic. Just like its original meaning, ghoul nowadays also refers to undead monster which thrives on human flesh. And this created a foundation for the idea of ghoul in Tokyo Ghoul.

Ghoul and the thirst of flesh

In Tokyo Ghoul, ghoul is described quite different from the real-life version. First of all, it is not an undead, but rather, a living being with full of its body function. Second, it has an appearance just like a normal human, but with the exception of having kagune – its hunting weapon. Finally, it is sentient being, or to be more specific, it has mind, feeling, psychology aspect of a normal human. The greatest part makes its hard to live like a normal human is its thirst for human flesh. For example of Touka in the first season, when she ate her friend’s food, she gradually became weaker and didn’t have enough strength to fight Shuu Tsukiyama.

Throughout the anime and manga, it is revealed that a ghoul can’t eat anything else except for human flesh. If it eats anything not human flesh then its body will be weaken. Therefore, it normally has an unending hunger for human flesh, killing and eating people.

Due to this dangerous nature, human has tried to defense themselves from these savage beasts. In the anime and manga, the human founded Commission of Counter Ghoul (CCG for short) which has trained countless Ghoul Investigators to fight against the ghoul.

If we take look at real-life animals, most of them have hunting, or defense, mechanisms and tools based on their nature. In Tokyo Ghoul, ghouls have a hunting/defense tool called as kagune. In the manga, kagune is like an organ which can morph out of the ghoul’s body. It can strengthen itself like a blade of steel, or become flexible like a whip or wings.

In details, each ghoul has an internal organ called kakuhou, which can create and release RC Cells. These RC Cells is like flowing blood which form the very shape and strength of the kagune, so to some extent these kagune can be considered to be “liquid muscles”. The power and appearance of a kagune will depend on the ghoul’s strength and mind. But in overall, the strength of a kagune, and ghouls in general, is far stronger than a normal human.

Another aspect of the ghouls in Tokyo Ghoul is that it has rapid regeneration. Normal weapons can’t do any harm to it, except for kagune and weapons related to kagune. Therefore, this idea gave birth to the quinque, weapons created from the kagune, which is widely used by the CCG members to hunt down ghouls.

According to Tokyo Ghoul lore, there are four types of kagune, each has its own strengths and weaknesses. Normally the CCG will base on these types information to come up with the best fighting strategy.

Ukaku is a feather-like kagune which excels at fighting in high speed, which morphs at shoulder area. Normally ukaku-type ghouls can harden their feathers and shoot them, which is good for long-range and medium-range combat. However, it will be a bad situation if they are forced to combat in close range. Some individuals can specialize in close-quarter combat; however, it seems their long-range capability is weaker. Ukaku-type ghouls are also incredibly fast, they are capable of finishing combat quickly. But they will have big problem in longer battle since they don’t have good endurance.

Notable Ukaku-type ghouls are the Kirishima siblings: Touka and Ayato Kirishima with their wings.

Koukaku-type kagune released from the point below shoulder area, which often forms as a sturdy shield. This shield can withstand strong impact, making it an ideal tool for defense. That said, it doesn’t mean that Koukaku-type ghouls can only defense. In combat, they can morph their kagune like a blade, hammer, or spear which is extremely tough and powerful. However, these Koukaku-type ghouls are slow compared to other kagune types.

Notable Koukaku-type ghoul is Shuu Tsukiyama who often fights with a strong blade wrapped around his right hand.

Notable Rinkaku-type ghoul is Rize Kamishiro, and later on, our protagonist: Ken Kaneki.

Each kagune type above excels a particular power: Ukaku leans on speed, Koukaku focuses on strong defense and durability, and Rinkaku focuses on regeneration and powerful strikes. On the other hand, Bikaku is a balance type and it doesn’t excel at any particular aspect. Bikaku-type kagune morphs around the tail-bone area and often has the shape of a tail.

* Fun fact: Bikaku-type kagunes are also used to make quinques for beginner Ghoul Investigators due to its balanced capability and easy to handle.

Chimera kagune is the products of multiple RC Cells types combine in a ghoul body. This case often occurs to children who have parents with different kagune types. In Tokyo Ghoul, this seems to be an extremely case as there are very few individuals have Chimera kagane. Notable Chimera kagune case is Hiname Fueguchi who has both Koukaku and Rinkaku.

Kakuja, the state of primal predators

Previously we know that ghouls often prey on human, but what will happen if they feast on their fellow ghouls? The answer is: those individuals will become a Kakuja if their feasting reaches a particular point. These powerful ghouls are few, but their power rivals even the best CCG members. In many cases, it requires multiple Ghoul Investigators, including Special Class Investigators, to take down a single Kakuja (with the exception of Arima Kishou).

Once a ghoul becomes Kakuja, its kagune is also dramatically changed, normally into an armor wrapping around the ghoul’s body. That ghoul will also gain tremendous power and protection for its original weaknesses. Like in case of Yoshimura, he’s an Ukaku-type ghoul but his Kakuja form creates a huge armor around him. His armor includes huge blades and tough armor, making him extremely dangerous in close-range combat, unlike normal Ukaku-type kagune.

The first case of Kakuja is Eto Yoshimura and her father (both take the name of One-Eyed Owl), as they have monstrous body armor and tremendous power. Until now, the only person who can suppress them is Arima Kishou, the most powerful Ghoul Investigator of CCG. Another notable Kakuja case is Ken Kaneki, though his kakuja state seems not to be complete but his capability can surpass Arima Kishou.

Ghoul Ranking, according to CCG standard

In Tokyo Ghoul world, fighting a weak ghoul is a reckless action by itself, not to mention fighting more powerful ghoul. So, in order to form proper missions and plans, CCG set up a ghoul ranking system as below:

S to SSS rank, the problem of uncertainty

From rank S to SSS, the ranking seems to be quite flexible and hard to define precisely since ghouls in these categories are hard to determine their true power. Therefore, the ghoul strengths listed in CCG ranking are approximately estimated only. The most notable unclear rank is the SSS rank which is created due to the existence of One-Eyed Owl. Both Owls (Eto and her father) are too strong to determine, even multiple Special Class Investigators can hardly stand a chance against them. The only one who can surpass them is Arima Kishou which is also deemed to be the best Ghoul Investigator.

In the latest chapters of Tokyo Ghoul:re, Ken Kaneki can also be a SSS-rank ghoul as an One-Eyed King, and his victory against Arima Kishou. However, the true power of his current state is unknown.

And that’s it folk! Next time, we will delve deeper into the ghouls’ society, their factions, and their true nature. For the meanwhile, stay tune for more news in the future!